You Don’t Win Style Points in Spec Tennis (and tennis) 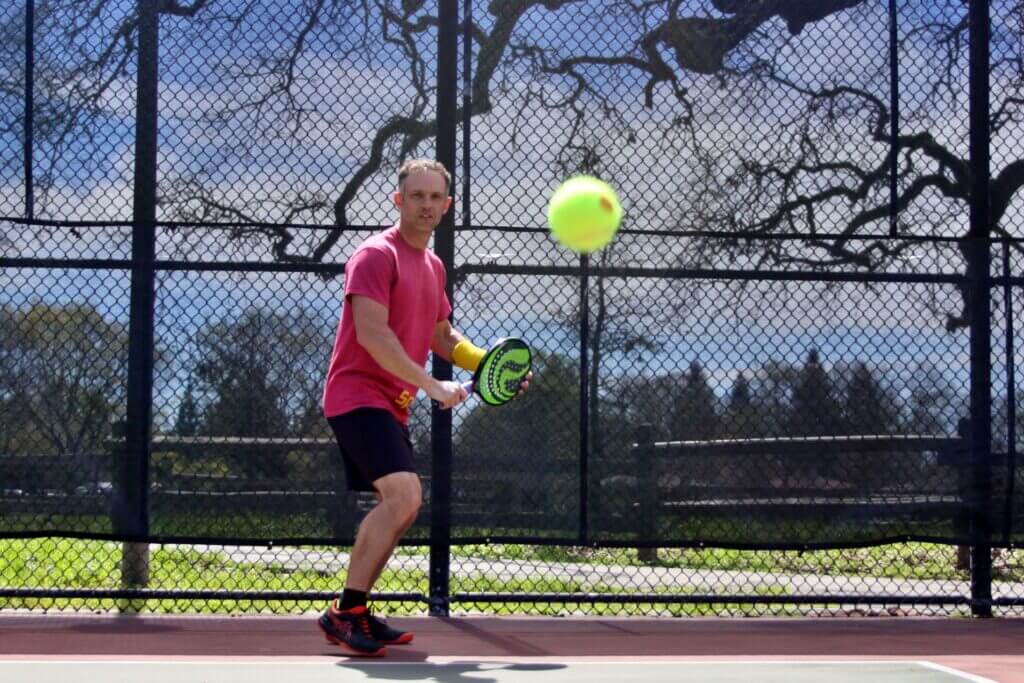 Tennis & Spec Tennis are not sports like gymnastics that are judged based on technique, but many players want to ‘look good’ and win at the same time. This is very hard to do when you are starting out.
It’s important to remember that how you hit the ball is actually just one component and there’s a lot of other components that go into playing and winning a match.

Let’s say for example, that you have the best-looking strokes. Everybody always compliments you on how good-looking your forehand is. One day you go up against opponent who has a very weak backhand, it’s almost non-existent. You’ve hit to their backhand a couple of times, and they’ve missed every single one.

So you know that your strategy to win the match could be, just hit the ball to their backhand and they’re going to miss. So you try to do that, but every ball that you hit goes to their forehand. Even though you’re hitting a very good-looking shot, the technique is nice, if you don’t know how to hit it to their backhand, you’re going to lose the match.

This happens a lot where players can’t hit to a certain spot on the court, or can’t hit a certain shot, and it causes them to lose the match. Do you see the importance of targets here over technique? When I start off a player, I emphasize that it’s more important to be able to hit the ball where you want it to go than to make it look nice because it doesn’t matter how good your technique is if you can’t place the ball where you want to, like we just illustrated it in that example.

Many times I’ve had players come to me, wondering why they lost to somebody who just “pushed” the ball. They didn’t have very nice-looking technique, they didn’t hit the ball hard, maybe didn’t even hit topspin, and they just lost the match really easily.

I explained to them it’s because the “pusher” was able to hit their targets. They weren’t taking a lot of risks on the shots and they were hitting them all slow, but they were able to place it where they want. Whereas you might be hitting an aggressive topspin forehand, and you’re not able to put the ball to the part of the court that you want consistently, and so it’s very easy for the pusher to beat you.

I had a guy on my college tennis team from Poland and his strokes looked very unorthodox, nothing I’d ever seen before. He was hitting two-handed slice drop shots off of his back foot. He would serve and volley with this pretty slow serve and only make it a couple of steps inside the baseline, but then hit a nice half-volley.

It didn’t look like he was trying hard or having to run hard but, man, was he very good at placing the ball. And he was very hard to beat because he didn’t give you a lot of speed to work with, and he was one of the top players. I can’t tell you how many matches the guy won, and he just frustrated opponents so much.

Now you wouldn’t necessarily teach somebody the technique that he has. It’s not the classic tennis technique that you see, but it worked. There are different ways to hit a tennis ball. There’s not just one right way, but some are more functional than others, and so he had very functional technique. He knew where to position himself and also where to hit the ball so that he didn’t have to run that much, and that would really frustrate his opponents.

Now, us guys on the team, we could beat him occasionally, but that’s because we practiced against him every day, so we knew how to handle it a little bit. But somebody from a different team playing against him, you had to really be mentally strong because it was so frustrating watching him dictate these points without using pace. So most players that he would play against would just collapse. They just couldn’t do anything to disrupt this guy’s rhythm.

The Importance of Targets

Going back to the beginning, when we talked about how people are hitting the ball, but not focusing on where they’re hitting it and why, my suggestion to you when you’re playing spec tennis or tennis is to think about this. Instead of thinking, “How am I going to they get it there?” just pick a target, and try to hit it there, and see if you can make it to that target area consistently. If you can’t make it to that target area often, or within a general radius of that target area, a few feet, then you know you need to work on this.

What I would do at that point is try to simplify your swing. So if you’re hitting a topspin forehand, try instead to hit a block forehand with your paddle a little bit open. The less swing you do, the more accurate you can potentially be with your target.

After you’ve tested yourself and you’ve determined that you can hit a specific target pretty consistently, (for example: deep crosscourt or short crosscourt, short down the line, right in the middle of the court) then you want to think about the why.

“Why am I hitting it here? What effect is it going to have on my opponent?” Because again, it’s not how you hit the ball, but it’s the effect that it has on your opponent. So you could hit a slow high ball and it can have a worse effect on your opponent than hitting a fast shot that looks really good.

Oftentimes when people practice, they’re used to a lower or faster topspin ball coming at them. They practice against that for years. But what they’re not used to is a higher, slower ball or a low slice that skids on the court. So if you can cause your opponent to make a mistake by putting them in an uncomfortable position, that’s a really fun and easy way to win.

Another way you can emphasize and focus on why you’re hitting the ball where you are is to think about it another way. Think about after you hit your shot, where are you going to have to move to (recover), to best be ready for the next shot?

A lot of people don’t understand proper recovery, and we won’t get into it on this today too much, but essentially you want to try to be crosscourt from your opponent’s racket most of the time when you’re playing back at the baseline.

If you’re hit a shot ‘down-the-line’ in order to be ready for the next shot, you have to quickly move to the other side of the center to be cross-court from their racket or paddle.

Many players hit a really nice down-the-line shot, but then they’ll just stand where they hit it. or recover to the center.Then their opponent is able to make them pay with an easy cross-court.

Involved in that decision also needs to be, “Well, what do I need to do after I hit that shot? Because if I just stand where I am, I might not be in the best place on the court to cover the next ball.”

Question Everything & Don’t Give In To The Norm

My next question is, “Why do the pros hit with topspin?” You actually come up with a good answer, and you say, “Because it allows them to hit the ball fast and still keep it in the court.” That’s great. A lot of people don’t have an understanding of that.

Then I’ll ask “Why do you need to hit the ball fast?” Your answer is, “Because I can make my opponent miss.”
Next question, “Are there other ways you can make them miss that don’t require you taking as much risk?” Then you say, “Well, it was weird. One time I hit a lob and they missed right away.”

So next I ask you, “Well, why don’t you lob every ball to see if they keep missing?” You quickly reply, “But that’s not how tennis is supposed to be played.”
Now, do you see what happened here when you answered this question this way? You have this notion in your mind of how tennis or Spec Tennis is supposed to be played, and you’re not allowing yourself to break free from that norm in order to win.
This happens to a lot of players where they’re afraid to look bad, or be labeled as a “pusher”. So they just continue to hit the ball the same way they think that they’re supposed to, but they don’t win.

The next question is, “What kind of spin do you put on the ball when you hit these lobs?” Your answer is, “Backspin.” So my final question is, “So if your opponents miss the majority of the time that you lob, do you ever need to hit with a topspin?” You answer, “No.”
Do you see what we did there? Obviously, I was playing devil’s advocate a little bit, but a lot of players might not need topspin at the stage that they’re at, or they might not need to be able to hit a serve at 85 miles an hour at the stage that they’re at.
It’s important to know what works to win at the level you’re at. Then as you keep rising to the higher levels, you can improve your game. So if you started off and you only knew how to hit backspin on both sides, and you start winning, there will probably come a time where you’ll face an opponent that can handle your backspin very well.

At that stage you might decide, “Well, I need to learn how to hit topspin so I have more variety in my game now, and I can push my opponent back behind the baseline.” Different things like that. But a lot of players, they try to learn what the pros are doing from day one. Although it may look good, it doesn’t really translate to them winning matches.

Thanks for reading and I hope you gained some good insight.