Why Would You Create a New Sport That’s Crazy! (The Story Behind Spec Tennis) 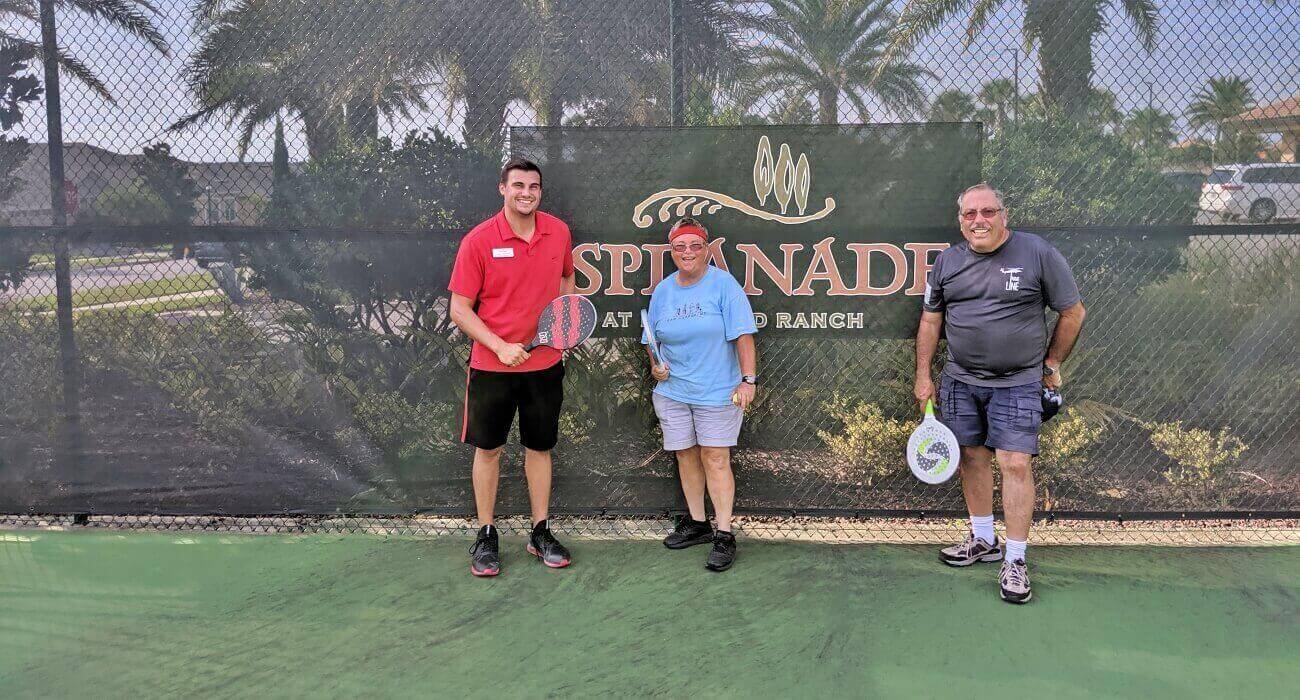 Today, I’m going to share my story, why I created Spec Tennis and how it happened. In the summer of 2016, I was driving by some pickleball courts with my dad and we stopped to take a look. I didn’t know what pickleball was at this time, but I was definitely curious about the court size. I thought back to my experience as a kid playing a little bit of paddle tennis in Venice Beach. And I wondered if we could do the same thing on these courts. And so we went out there and tried it and it was okay. But unfortunately the ball was a bit too lively for the court size. Now I have a background as a tennis teaching pro. And so I was aware of the different balls that are out there.

And I wondered if I modified the equipment slightly, could I make it a more enjoyable playing experience? And it worked. I settled on the orange dot low compression tennis ball as the best ball for my needs. And then I got to thinking, “well, this is pretty fun, there has to be other people out here who would also find this to be fun, not just my dad and I. What if I actually create a new sport using the pickleball court.” From that day forward, I dove in and Spec tennis was born.

What Should the Scoring System Be?

Next, I had to come up with a scoring system and other rules of the sport. My goal was to keep it as simple as possible. And so the way the scoring works is like no-ad tennis scoring. It’s first to win 4 points wins a game. And then first to 4 games wins a set.

And then usually win two out of three sets to win a match. If you’re playing in a tournament, then it’s three out of five most of the time.

I find that with regular tennis, a lot of people struggle with learning the whole ‘Ad” and deuce thing. So with Spec Tennis I wanted to keep it very simple, there’s no tiebreakers and everything is sudden-death. And this actually creates a lot of good drama because you can win a whole match by one point; both teams can be tied in sets and in games, and then that deciding point can determine the whole match. So that’s one thing.

Another thing is people don’t seem to tank in Spec Tennis. If you’re playing maybe ping pong scoring, maybe you’re playing to 11 and somebody down 7-0, they might give up on that game. Whereas in Spec tennis, when you’re down 3-0 it’s actually not that hard to come back and win that game.

So you see people trying the whole time and never giving up. And it’s easy to remember, just go to four and then play first to four games wins a set.

I also wanted to take away the barrier of having to serve overhand because I see so many people struggle with the overhand serve in tennis. It’s their least favorite thing, especially at the recreational level. It is actually a hindrance. It’s a disadvantage to be serving for a lot of people. And so why not just get the point started?

So in Spec Tennis you’re required to serve underhand, but you only get one serve. So it keeps things moving really quickly with not a lot of time in between points. You never have that downtime of somebody missing their first serve into the net and going to pick it up, walking back, bouncing the ball 20 times before they serve, everything just happens really quick.

And even for the most beginning players, they’re able to start serving and playing very quickly. Another interesting rule that I came up with is you have to serve from four feet behind the corner of the court.

So in tournament play, there’s actually a tape mark that is four feet behind the intersection of the baseline and sideline. You have to have one foot on that mark when serving and the reason for this is #1 it makes you recover after you hit the serve. So you can’t just stand there based on where you hit the serve. You might have to move a bit, but also it makes it harder to serve and volley for the higher level players. You’re still allowed to do it, but it just makes it harder to get as close to the net for that first volley. So this adds another element of challenge in there as well.

With the scoring system & rules in place, we were ready to actually start playing. Towards the end of the summer in2016, I actually held a tournament and I got eight players out there, which was a big success considering that nobody was playing the sport before and now we’ve got eight guys to actually not just play socially, but compete in a tournament, put themselves on the line for a whole weekend.

They played singles one day, doubles the other day and it was a ton of fun. This was kind of the unofficial launch of the sport. It really brought the idea that initially started out in my head to fruition. Right? Before that it was just my dad and I playing. And now there’s actually other people in the world that are playing this sport.

The Paddles have Evolved…

For the first year and a half or so, we were using a platform tennis paddle as the paddle for Spec Tennis. But then I started thinking, how can we give this more of an identity and also make it better for Spec Tennis?

Some of the feedback I was getting was that the platform tennis paddles were too heavy. They often weighed over 12.5 ounces. And for some people, especially if you’ve had tennis elbow before, you’re a little bit skeptical to pick up this heavy weighted paddle. So eventually I started working with the supplier and after a few iterations, I came up with a paddle that was a lot lighter.

I was able to substantially decrease the weight And the other thing was the platform tennis paddles all have this glass gritty surface. It’s very easy to accidentally nick your finger and start bleeding on the court, and I didn’t want that to be part of the Spec Tennis experience.. In platform tennis you might need that grit to be able to apply spin to that heavier ball, but in spec tennis, that grit is not needed as much.

I ran some tests and tried to determine if there was a difference in spin between having the glass surface versus having just a textured surface. And what I found was that the texture surface was able to provide the same amount of spin as the glass surface for spec tennis, so that glass was not needed.

So the finished product of these paddle tests became a brand called Spade Sports, which produces the first paddle design specifically for Spec Tennis.

The 3 Functions of Spec Tennis

Now, initially when I created Spec Tennis, the purpose was just to create a fun experience. But since then in the past four years, it’s become a lot more than that. And so I like to categorize it in three ways.

#1 is a pathway into tennis, out of tennis or cross-training for tennis—it’s a “Bridge” Sport.

So what I mean by that is because it’s easier than tennis, (but mimics the same skills that you use in tennis) you can use it very effectively for somebody who’s looking to get into tennis because they can have success a lot sooner and build confidence and have more fun than if they were to start off with tennis.

It can also be a pathway out of tennis because players get to a certain age sometimes where they’re not able to cover the tennis court the same way they used to, but they still enjoy the game of tennis.

So if they transitioned out of tennis, into Spec Tennis, they’re still going to have that same feeling of being able to enjoy the tennis-like game. It’s less of a difference than switching to pickleball for example, but they’re able to cover the court a lot better. So their rally quality goes up & enjoyment goes up.

And then the other comment of it being a ‘bridge sport’ is ‘cross-trainign.So for those tennis players who are looking to improve their tennis game, Spec Tennis can help with that drastically. Mainly by enabling you to practice skills effectively that are a lot harder to practice on a tennis court. So even for advanced players, being able to train patterns and tactics on that smaller space really increases precision and tactical awareness.

The second form that Spec Tennis takes is as a Social Sport, families can go out there and play together and have fun, have a lot of success and not be coaching each other or yelling at each other.

I’ve seen so many times when families go out and try to play regular tennis and unless they’re all at a similar level and serious tennis players, it doesn’t usually work out so well.

In another example, Spec Tennis can be a social sport for people who have never played a racket sport before.

Tennis is often a high barrier to entry sport. It costs a lot of money and it takes a lot of time to be able to get to the level where you’re having fun. Whereas, Spec Tennis is the opposite of that. You can also mix levels very effectively because the absence of the overhand serve and the ability to hit ground stroke winners, higher-level players, can’t overpower the lower-level ones as easily. And the lower-level ones are able to get more balls back. They’re able to cover that smaller court and they have more control of the ball. So this is great for social events and things like mixed doubles playing with the family like I mentioned before, and even just simply playing with a friend.

Can You Really Make Money with Spec Tennis?

The third form that Spec Tennis has taken on is a revenue producing sport for coaches and clubs & ambassadors. It can really fuel any tennis program by growing the size of the program and also increasing player retention. Players who have more success also have more fun and stay interested in the sport and program for longer.

We’ll dive deeper into all of the 3 functions of Spec Tennis in future posts but I just wanted to give you a brief overview.

.One thing that’s really taken off in the last six months has been the Spec Tennis Ambassador program, it’s really been cool, getting to know and meet all of these ambassadors who are promoting Spec Tennis in their local communities.

And so if you have any interest in becoming an Ambassador for Spec Tennis, click the link HERE and fill out a quick application, I’d love to hear from you.