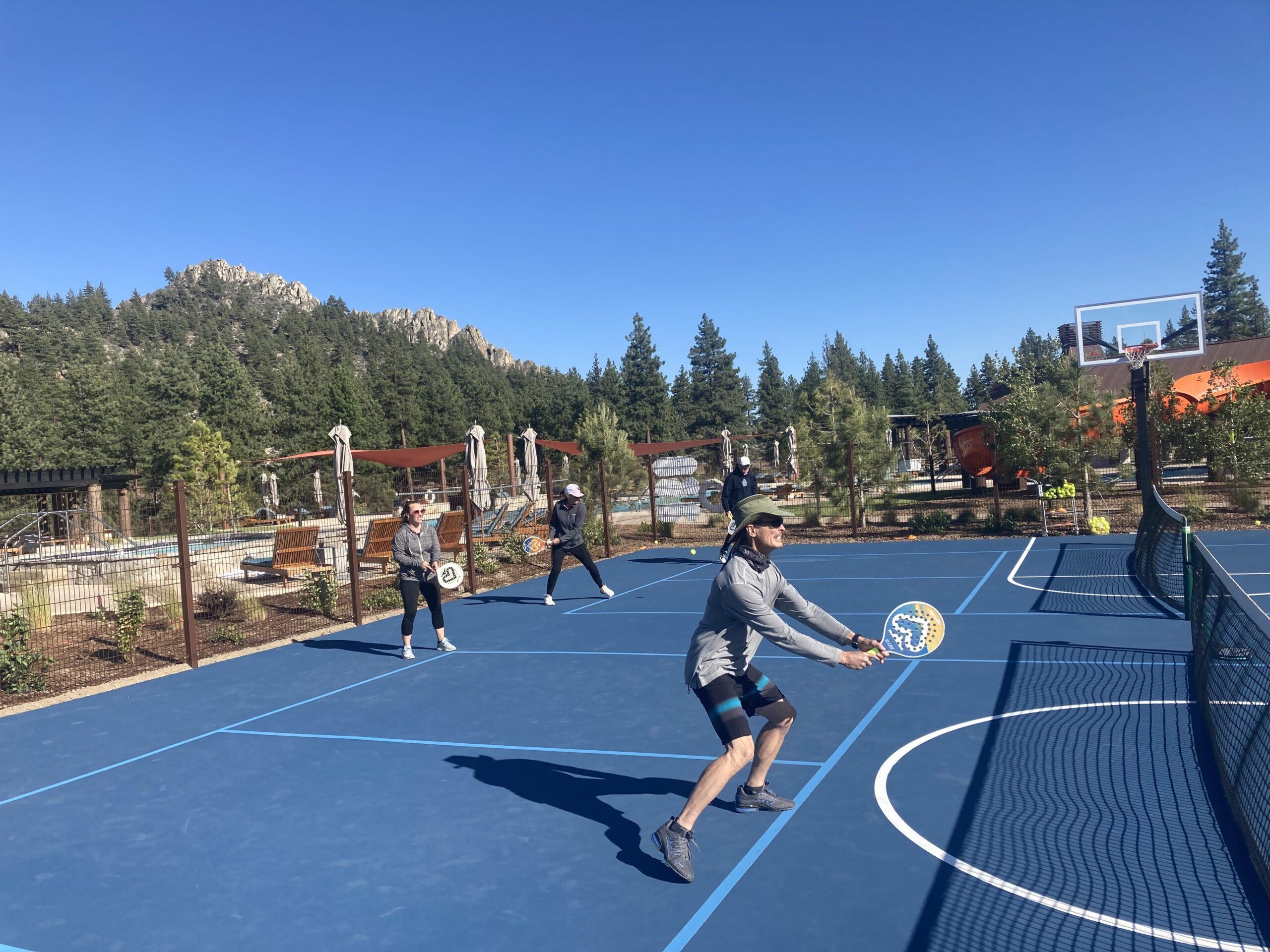 Today, I want to talk about the Spec Tennis Culture. Since the sport began it’s been amazing, but I think it’s very important that it stays that way.

It’s a very inviting atmosphere where someone who has never played before can walk up to a group of players, and oftentimes those players will ask that person if they’d like to try Spec Tennis. And it’s a common occurrence to see players of various levels playing together.

We can learn a lot from both tennis and pickleball.
Tennis is not an inviting sport. You never see a random person walk up to a group of tennis players and then get invited to join them or try out tennis. This is it’s downfall and one reason why tennis is not growing.

Pickleball started out at the complete opposite end of the spectrum and that’s one reason it’s grown so fast. Players who have never played before constantly get invited to jump in with experienced players.

Just think if you’re a person who is considering playing one of these sports and in tennis you get the cold shoulder when you ask if you can try, but in pickleball you are welcomed with open arms, which one are you going to play?

But even now I’m hearing stories about pickleball groups becoming exclusive and invite-only, and I think that’s going to hurt the sport long-term. Pickleball groups are becoming segregated.

The moment that players reach a level where they start competing, they become really serious and often forget about the reason they started playing the sport in the first place–to have fun, or get some exercise in a social environment.

But they have memory loss when it comes to remember when they played for their first time? Did a pleasant more skilled player offer to show them how to play? Probably. If players don’t pay it forward once they reach a certain level, then the welcoming culture falls apart.

So this is why it’s so important to keep this in mind in Spec Tennis. We can avoid a negative culture shift, if everyone does their part.

Sure, I get that playing with players who are at a lower level than you, might be less fun than playing with players at the same level or at a higher level, but you need to do it at least a percentage of the time. And if on a given day you have a group of 4 out on the court,you’re playing a competitive match, and a beginning player comes up and asks if they can join, you don’t have to say yes, but try to give them options, make them feel good, don’t just turn them away and leave a bad taste in their mouth like the tennis players do.

•In fact I saw the other day that Djokovic practiced with a college player (not even a division1 guy but an NAIA guy) in preparation for his French Open semi-final match against Nadal.

•When you play with a lower level player, use it as a great reason to work on something. It’s hard to work on things when you are playing with someone at the same level or at a higher level, you’re just focused on playing your best game.

But when you’re playing against a weaker player, say your backhand is not very good, then make it your mission hit as many backhands as you can. Also you can combine things to work on with doing things that make it easier for your opponent, for example maybe your opponent who is at a lower level than you and can’t handle it when you hit the ball hard at them, but maybe you notice that when you slice and slow it down, your opponent handles it better. Maybe you also realize that your slice game could use some improvement. This is a win-win if you slice every ball because you’re improving that aspect of your game, while at the same time slowing the ball down, allowing your opponent to have more success.

Refusing to play with weaker players is the fastest way to not have any friends in the Spec Tennis world. And there usually comes a time when you end up isolated, only being able to play with the same 3 people because you all have the same mentality of not wanting to play with anyone weaker. And that attitude is conveyed to the higher players as well, so they don’t want to play with you either since they see you as selfish, as a “me” person. So you eventually hit a plateau and stay at the same level.

•Is it expected that you play with weaker players all the time? No, absolutely not. But there needs to be a mix.

Think about the benefits when you play with weaker players:

1) You help them improve their game, and if they one day reach your level, you know have more people to play against that are at your level.
People don’t like to help others improve because they are worried that the player might one day reach their level and beat them, but this is stupid. If you currently have 8 players in your area at your level, why wouldn’t you want that to eventually become 30 players in your area.

The more variety there is, the more fun it becomes. Also the more players, the more offerings there are–you’ll see more tournaments, leagues, events, clinics etc.

2) You gain a lot of respect from not only that player, but also from other players. Players who are more advanced than you may witness what you are doing and ask you to play with them because they see you are an all-around nice guy.

3) You grow the sport, and it becomes contagious for others to do the same thing you do. That lower level player that you played with may think, wow that sure was great of him to play with me even though he’s at a much higher level, I should do the same thing with a player who is at a lower level than me. If players are brought through the ranks this way, it becomes very natural for them to pay it forward to next wave of new players.

4) You get invited to a lot more groups and events. For most people, the social aspect and the fun is why we play the sport. If you take those aspects away, it’s not the same. Don’t sabotage yourself from getting invited to groups and events simply because you won’t play with someone who is not at your level.

•Now what if you arranged with 3 other players to go out and play doubles and then someone walks onto the court and asks if they can join you?
It’s definitely okay to say ‘no’. You can say you’ve been looking forward to playing doubles with this group for a while, or maybe you are training for a tournament with your partner etc.

But what would be even better is if you say ‘no’ but then give that person an opportunity to play with you another time. For example, “No, but after we finish this match in about 30 minutes, I’m happy to stick around and hit the ball with you a little bit. Or “No, but come back tomorrow morning at 9am when there is a drop-in group, I’ll be there and will show you the ropes.”

The person that asked now leaves the court happy, knowing that you said “no” because it wasn’t appropriate for them to play with you at that moment, but that you made an effort to include them and spend your valuable time playing with them in the future.

So in summary, by everyone giving back even just a little bit, we can maintain a very welcoming culture in Spec Tennis which is what we want. We want to give access to as many people as possible, so they can share the same great experiences that we have on the court.

Have any additional thoughts as to how we can maintain this culture, email me at nate@spectennis.com

Remember, ‘you’re just one rally away’