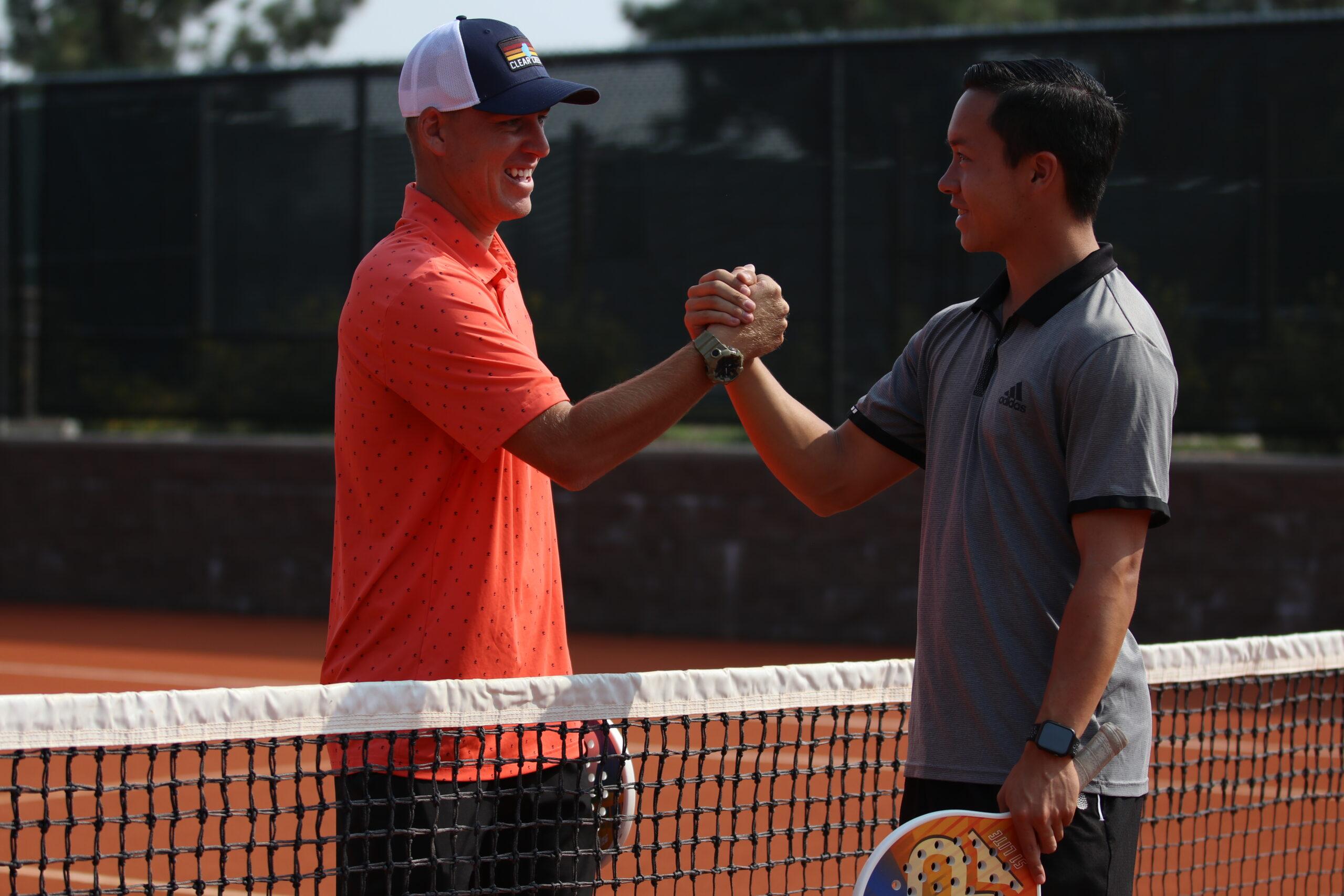 I preach this all the time, but I’m sure there are doubters out there so today I’m going to provide some rationale and examples.

#1 Tennis is very difficult to learn.

The court is massive and the ball is fast and bounces high. Sure in a tennis lesson, maybe the coach can give the student a ball that is in their optimum strike zone every time, but what happens when that player goes out and tries to play with a friend?

The friend can’t put the ball in the player’s strike zone, so the player ends up forming bad habits with their technique trying to fight off balls that are out of their strikezone. At this stage in their tennis journey they have not yet learned how to move backwards properly to the let the ball drop and they also haven’t learned how to take the ball on the rise.

Problem solved with Spec Tennis–the ball ends up in the optimum strike zone a lot more often then it does in tennis, which creates a better learning environment–one where the player can have success. More success leads to more fun which leads to more desire to play the game

Why can anyone play ping pong? Because the sweet spot is so close to the hand. When a tennis player is trying to make good contact with the ball do you think it’s easier to do so with a 27 racquet or with an 18” paddle? Obviously with an 18” inch paddle.

Because of this, it takes less time for a player to get the hang of a particular skill. They leave the court with a good feeling because they felt they improved a lot in a short amount of time.

Now you’re probably thinking, “but  once they get it with the paddle and then switch to the tennis racquet, they will struggle once again right?”
Maybe for a couple of hits, but you’d be amazed at how throughout this process the player is training their brain to find the sweet spot.

So it takes very little time before they are able to find the sweet spot on a tennis racquet. For me personally, yes I’ve played a lot of racquet sports, but if you give me any size racquet or paddle, I assure you I will be able to hit the ball in the center immediately. Tennis racquet, squash racquet, badminton racquet, ping pong paddle it doesn’t matter, my brain is trained to adapt to the tool i’m using. Sure, the new tennis player, won’t be able to adapt as quickly, but the more they switch between the paddle and the racquet, the more it becomes 2nd nature.

Did I mention that the swings in Spec Tennis and tennis are absolutely identical? So this means that when a player switches from one to the other, they don’t have to think at all about using a different technique, they only have to think about finding the sweet spot of the racquet or the paddle.

#3 A big part of improving your tennis game that is sometimes overlooked is the tactical side.

Many players focus solely on their technique but then when it comes time to play a match, they are lost. Sure maybe they improved their forehand a little bit, but did they improve their overall game? Not really. Because they don’t know how to actually play the game.

If a new tennis player wants to work on tactics but they can’t make more than 1 shot in a row consistently in the court, how can they work on tactics? They can’t. Take this same player and put them on the Spec Tennis court–they have a higher success rate making the ball in the court, and they are able to learn how to actually play the game rather than just how to hit the ball.
I often point back to that classic example of the tennis player who has good looking strokes but gets destroyed in every match they play, because they have not learned how to play the game.

Instead if this player focused less on ball striking and more on how to play, they would have more success and a much more enjoyable experience on the court.Ball striking is important yes, but you don’t need to be an A ball striker to win at the C level.

My advice is to improve your ball striking as you rise through the ranks, and you get to a point where you need to be able to hit a better ball in order to win.
Again Spec Tennis enables player to learn how to actually play from early on, because the paddle is less powerful than a tennis racquet and enables players to control the ball better, so even when their ball striking is not at an A level, they are able to hang in the point and execute strategies.

#4 More balls get hit in a given session of Spec Tennis than in Tennis.

With the court being smaller, the amount of time that elapses between shots is less time than if you did the same thing on a full size tennis court. The balls are also contained in a smaller space, so when you go to the pick up the balls, less time is spent gathering them.

Plus, the average rally in Spec Tennis lasts longer than it does in tennis, because players are more capable of covering the court and they have more control on their shots so they are able to make more balls in.

Would you rather go out and hit more balls or less balls? Probably more balls if you’re looking to improve right? And it’s not the like the quality of balls you are hitting goes down when you are playing Spec Tennis, it actually goes up, because like I said before, it’s easier to find the sweet spot of the paddle, more balls are ending up in your optimum strike zone, and you’re able to cover the court more efficiently so you end up scrambling less, resulting in fewer sloppy shots than we would see if you were playing regular tennis.

#5 Players Practicing on their own.

One big reason improvement in tennis is slow is because it’s very challenging for players to practice on their own with a player of similar level. For example, if the player takes a private lesson and learns to hit an overhead, it’s not likely that the player will be able to go out with a friend later that week and effectively work on their overhead.

So this means that the next time the player works on their overhead is in the next tennis lesson–that is, if the coach even has the player work on it. Practicing something just once a week won’t cut.

With Spec Tennis, players are set up for success when it comes to practicing on their own. I encourage even my tennis players to practice on their own using Spec Tennis because they’ll have a more productive practice with less frustration.

With Spec Tennis, you can literally play anywhere. Whether that means hitting volleys back and forth in the house, playing in your driveway or walking to a block to your local neighborhood playground, you can be playing within minutes. Playing tennis is more of a production, you have to find a tennis court. Maybe the closest tennis court to you is a 15 minute drive.

If given the choice of stepping outside your house and hitting immediately or driving to a tennis court, the convenience factor is much greater with Spec Tennis. This means that a player who is not exposed to Spec Tennis, will play tennis less often. Whereas a player who plays Spec Tennis, will likely have more instances where they are hitting the ball.

Just think about asking your neighbor, child, or spouse, ‘hey do you want to hit the ball for 20 minutes”– that’s a much easier sell than ‘hey do you want to go play tennis, its 30 minutes of travel time and then there’s always the risk that the courts might be full”

If you’re a tennis player who is looking to add a specific tactic to your game, and you try it out in practice, you’re at the mercy of your practice partner–if they don’t perform well, you don’t end up improving your tactic. What I mean by that is say for example you want to put together a pattern where you hit crosscourt, eventually hit down the line when your partner hits a short ball, and then close the point out with a volley.

Well what if every time you hit down the line, your partner either can’t get to it or they get to it but miss? This gives you zero practice of finishing the point with the volley. Try this same pattern in Spec Tennis and your partner will give you many more volley opportunities.

Or another example could be you want to put your opponent in a situation that forces them to lob so that you can win the point with an overhead.
When you do this on the full size tennis court, imagine two things happen–1) either your opponent’s lobs are too good and you can’t get to them, or 2) they miss the lob completely

In both cases you never get to practice your goal which is closing out the point with an overhead. Again, switching to Spec Tennis, your opponent is more able to make their lobs in, and you are more capable of covering the court, resulting in you getting to play more overheads.

#8 More People to Play With

If you’re a tennis player you typically need to find someone around your level or maybe at a slightly higher level to play with. Because of this, the # of available tennis partners is more limited. Imagine you’re an intermediate tennis player–it wouldn’t be beneficial for you to practice with someone who has never played tennis before, because they won’t be able to keep a rally going.

In Spec Tennis though, they can very quickly (sometimes even on Day 1) get a level where they can rally with you. This opens up the door for more people to play with.

So I just gave you 8 examples of how Spec Tennis will help you improve your tennis game. To wrap this up, with SpecTennis, players have quicker success in every tennis skill than they would have with a full size tennis racquet on a full size court. The more success a player has, the more confidence they build. Also, they typically have more fun when they have success, and this leads to them wanting to play more often. A player can only fail so many times before they lose interest in the activity. Spec Tennis prevents this from happening.

If Spec Tennis was around when I was growing up, I’m certain I would have made it an essential component of my daily tennis training. And I really believe I would have reached a higher level in tennis than I did.

Thanks for taking the time to read, and remember you’re just one rally away.

Head to https://www.spectennis.com/ to learn more about the sport